Chris Van Heerden is ready to snatch the “0” from the ring record of his next opponent.

That promise extends to Terence ‘Bud’ Crawford as well as the unbeaten welterweight he’s actually expected to face in his next bout.

The resurgent welterweight contender from South Africa created a stir on Tuesday, stemming from an open-ended social media post regarding preparation for a targeted springtime assignment.

“Fight announcement coming from [Top Rank] soon,” Van Heerden (28-2-1, 12KOs) stated through his verified Twitter account. “His 0 has to go. I never say no when offered to fight I have to win every fight to get my [s]hot.

“[Let’s] not forget I have 1 loss & that to (unbeaten, unified welterweight titlist) Errol Spence Jr (an 8th round stoppage loss in September 2015). I fought [f]ormer [c]hampions, [u]nbeaten guys & Got the job done.” 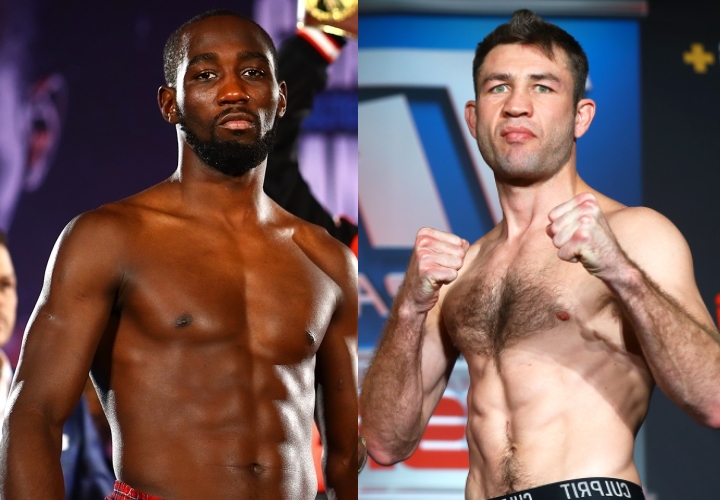 From the tweet and given his promotional affiliation, it’s easy to understand why fans would be led to believe that Van Heerden is referring to Crawford (36-0, 27KOs), the undefeated three-division and reigning welterweight titlist. As only Boxing Twitter can do, the suggestion of such a fight was met with relentless bashing, prompting Van Heerden to respond and also clarify in part regarding his previous statement.

“Why the hate & negativity to my last tweet,” Van Heerden wondered aloud. “There’s unbeaten welterweight[s] out there not just Crawford.”

One such unbeaten welterweight out there is the very boxer in mind when the posts were made. BoxingScene.com has learned that advance talks have taken place for Van Heerden to actually face Giovani Santillan (25-0, 15KOs), in an April crossroad bout between southpaws.

Santillan has cut his teeth on the Thompson Boxing circuit in Ontario, California. The 28-year old from San Diego remains best known for his two-round annihilation of then-unbeaten Sammy Valentin in their July 2017 Telemundo headliner in Tampa, Florida.

Such a fight would actually provide grounds for the winner to land a title shot. Of course, any such opponent in the talent-laden welterweight division will be met with resistance given the high demand for unification bouts.

Crawford remains hot in pursuit of such an opportunity, although it remains unlikely even for 2020. The switch-hitting pound-for-pound entrant is hardly a first option for the welterweights who fight under the Premier Boxing Champions (PBC) banner, such as Spence and Manny Pacquiao, who between them hold the balance of the relevant welterweight hardware.

Even if such a fight were to happen, it wouldn’t take place until later this year by admission of his own team.

“A stay busy fight [and then]—at the end of the year—a potential fight with Spence,” Brian ‘Bomac’ McIntyre, Crawford’s head trainer and manager told Boxing Junkie’s Sean Nam when asked of the 2020 vision for his star client. “Late May, early June (for Crawford’s next fight).”

To date, the only option really floated in public in recent days was Arum’s suggestion of Crawford heading to the octagon to face UFC superstar Conor McGregor. However ridiculous it sounds, it would read par for the course for what Top Rank has in store for arguably the best fighter on its roster and in the world.

“My dream is to have Crawford fight in Africa,” Arum told FightHype.com around the time of Crawford’s eventual 9th round knockout of mandatory challenger Egidijus Kavaliauskas last December in New York City. “I don’t know why, I think Terence would love that and it would be great for his image.”

The quote came around the time Arum was telling media of the difficulty in selling tickets in today’s U.S. boxing market. With that came the brainstorm to go on a global tour in the new year, and with designs on Crawford heading to South Africa.

Naturally, a fight against a native son would make perfect business sense. Van Heerden has fought largely in North America since 2014, with his last fight in his original home country coming in a 12-round decision win over Sacky Shikukutu in October 2016. The feat is part of a five-fight win streak enjoyed by the 32-year old, who in his most recent start earned an eight-round points victory over Aslanbek Kosaev last August in his adopted Los Angeles home region.

Next up could very well be a tough but openly embraced clash with Santillan. Of course, he also wouldn’t turn down the chance for an even greater opportunity.

“It’s not like this fight has come out of left field,” Peter Kahn, Van Heerden’s manager told BoxingScene.com. “Bob Arum talked about (last December) how much he’d love to bring Terence Crawford over to South Africa this year. What other welterweight challenger would make sense for that fight than someone who comes from South Africa?

“Bob has mentioned that possibility and there’s also the fact that Terence Crawford needs an opponent for what Bomac calls a “stay-busy” fight. As Chris’s manager, of course I have spoken with Bomac about making that fight happen. It’s a perfect scenario for everyone.

“If it doesn’t work out, then we will continue with what we are currently working on to finalize.”

One way or another, Van Heerden wants to ruin someone’s perfect ways in the ring for his next fight. After more than 13-year in service, it’s tough to argue that he hasn’t yet paid his dues.

Amir Imam: I Just Have To Be Consistent At This Point In My Career