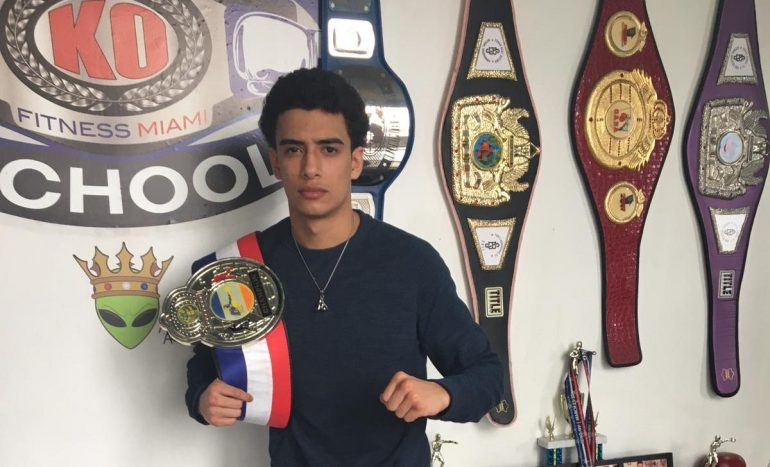 19
MAY
BY JOSEPH SANTOLIQUITO

Aaron Aponte dragged the gym bag behind him across the parking lot like he was lugging rocks, as he made his way to the waiting grey Dodge Ram. Once inside, Aaron’s eyes drooped to the cab floor. Tears soon followed. He didn’t like this new boxing idea.

Aponte was nine at the time.

Boxing was serving as a way to get stronger for baseball.

It’s turned out to be a way of life—after some initial push back.

Aaron and his father, Reniel, now laugh at the recollection.

It all changed in Aaron’s very first fight. His galvanizing moment came a year later, after he won, then hoisted up with a belt in his hands.

“That changed everything for Aaron,” Reniel recalls. “He fell in love with boxing. He said there was no greater feeling than having his arm raised.”

Since then, Aaron Aponte’s arm has been raised quite often.

The 18-year-old prodigee signed with Peter Kahn in March, and left the amateur ranks as one of the more prominent talents in international boxing, racking up a 98-18 record.

He’s a 6-foot junior welterweight who fights out of a conventional style, though writes lefthanded and throws righthanded.

Because of the COVID-19 pandemic, Aponte’s pro debut has been pushed back, but it appears it may come sometime in late June, possibly June 28 in Florida.

There’s a toy red-white-and-blue belt that adorns the white wall in the KO Fitness foyer. It may seem insignificant against the other larger, more austere-looking straps in the Miami, Florida, gym.

But to Aaron, it’s a reminder of the long climb he’s made from the crying, sniffling, little kid in his father’s truck to the row of belts that now line the front of KO Fitness.

“I look at that belt and think, ‘Everything started with this,’ and I’ll tell my dad and almost burst into tears,” said Aaron, who graduated this spring from Mater Academy Charter High School in Hialeah Gardens, Florida. “I have big plans. I’d like to have all of the belts by the time I’m 21. I know it will take time. But I also know I can do it.

“It goes back to when I first fell in love with boxing. No, it wasn’t love at first sight. It took some time. I know it’s all on me. I have to make it happen.”

Aponte was on the small side growing up. He was on a travel baseball team and Reniel, who’s known as “Chino,” wanted Aaron to get stronger. So, Chino talked to a friend who knew former decorated Cuban amateur Angel Espinosa.

At first, Aaron wanted no part of it.

“Aaron was always fighting in the dugout with the other kids, so I was thinking maybe he had a desire to fight other kids,” recalled Chino, laughing. “Aaron was a real skinny kid. I told him we would use boxing as conditioning.

“Aaron grew up around boxing. We would have fight nights with the family watching Felix Trinidad and Aaron we would watch with us. I picked up Aaron the first day from the gym and he was crying.

“I kept telling him to keep trying. I had him doing drills on the heavy bag, and he ended up crying again. There were days he left the gym crying.”

Although, Aaron kept coming back.

By the time Aaron was 10, he knocked some kid out in his first fight. Espinosa raised Aaron up on his shoulders. From there, Aponte was locked in.

At 14, Aaron was 114 pounds. He played football and ran track in middle school. As a tall, lithe defensive back, he went up against kids who were 40, 50 pounds heavier than him.

One too many headaches ended his football career.

It was around 15 that Aaron experienced a growth spurt. He went from 114 pounds, skipped 118, and moved to 123, and then 132, with his parents buying new clothes for him each month. 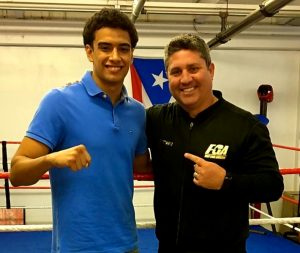 Aponte is going to be a problem for anyone he faces. He has power with both hands, because both hands are dominant. He batted right and threw right when he played baseball. Everything else he does lefthanded.

Espinosa liked how powerful his left was, so he had Aponte use his left as his jab hand.

When Aaron was in kindergarten, Melisa Aponte, Aaron’s mother, received a call from a teacher, saying Aaron does not know how to write. Melisa went to the school and explained that Aaron had been writing with his right hand.

It happened to be his wrong hand.

“But with me, I don’t know what my stronger hand is. I guess it’s my left. I even bat righthanded. I can’t throw a baseball with my left hand. I can’t write with my right, though.”

The last time Aponte picked up a glove and a ball was five years ago. It’s been strictly boxing gloves since then.

“Aaron has something that you can’t teach in boxing, and that’s natural power,” said Kahn, a 2019 BWAA Manager of the Year nominee. “He’s also had an extensive amateur career. At 6-feet tall, for a 140-pounder, he has such a physical advantage that I see him really having a clear path to being competitive early, all the way to a world title, as he continues to evolve.

“He’s been stopping kids since he was little. We’re looking at Aaron’s pro debut in June. Because of his power, and who’s a boxer-puncher that’s still maturing and growing, that’s the crazy part of where Aaron can go.”

Joseph Santoliquito is an award-winning sportswriter who has been working for Ring Magazine/RingTV.com since October 1997 and is the president of the Boxing Writers Association of America. He can be followed on twitter @JSantoliquito.

TRINIDAD VARGAS WAS BORN TO BOX